home > blog > This All Javascript Mania has to stop
January 24, 2018 by Rodolphe Fouquet

This All Javascript Mania has to stop

During the few past years, the price of DRAM has droppped significantly... well, not in 2017. 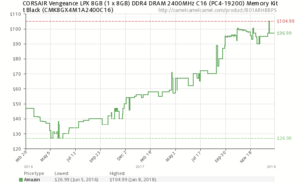 Following that memory abundance available on computers, more and more desktop applications have been developed using technologies such as Electron, NW.js. To give you an example, here is a list of popular applications relying on those technologies:

Although practical from a development standpoint (HTML5/CSS, lots of npm repositories, Javascript being a super easy language), those applications are memory hogs, and when you are a developper running at least 2 of those apps (saying Slack + Atom + Spotify if you're listening your music), it hurts your ram that way:

It's an 11 times increase, with apps eating RAM like that, 8GB are really not enough, this has to stop.